This database is an index to all individuals enumerated in the 1900 United States Federal Census, the Twelfth Census of the United States. In addition, the names of those listed on the population schedule are linked to actual images of the 1900 Federal Census, copied from the National Archives and Records Administration microfilm, T623, 1854 rolls. (If you do not initially find the name on the page that you are linked to, try a few pages forward or backward, as sometimes different pages had the same page number.)

Enumerators of the 1900 census were instructed to record the names of every person in the household. Enumerators were asked to include the following categories in the census: name; address; relationship to the head of household; color or race; sex; month and year of birth; age at last birthday; marital status; number of years married; the total number of children born of the mother; the number of those children living; places of birth of each individual and the parents of each individual; if the individual was foreign born, the year of immigration and the number of years in the United States; the citizenship status of foreign-born individuals over age twenty-one; occupation; whether the person could read, write, and speak English; whether the home was owned or rented; whether the home was on a farm; and whether the home was mortgaged. The categories allowed Congress to determine persons residing in the United States for collection of taxes and the appropriation of seats in the House of Representatives.

Few, if any, records reveal as many details about individuals and families as do the U.S. Federal Censuses. The population schedules are successive "snapshots" of Americans that depict where and how they were living at particular periods in the past. Because of this, the census is often the best starting point for genealogical research after home sources have been exhausted.

The United States was the first country to call for a regularly held census. The Constitution required that a census of all "Persons...excluding Indians not taxed" be performed to determine the collection of taxes and the appropriation of seats in the House of Representatives. The first nine censuses from 1790 to 1870 were organized under the United States Federal Court system. Each district was assigned a U.S. marshal who hired other marshals to administer the census. Governors were responsible for enumeration in territories.

The official enumeration day of the 1900 census was 1 June 1900. All questions asked were supposed to refer to that date. By 1900, there were a total of forty-five states in the Union, with Utah being the latest addition and Alaska, Arizona, Hawaii, New Mexico, and Oklahoma enumerated as territories.

Updates:
13 Aug 2020: Names that were missing from the "Indian Territory" and "Military and Naval Forces" were added to the census.

Provided in association with National Archives and Records Administration
This is a census of the U.S. population as of 01 June 1900. Learn where your ancestors lived, who lived in the household, ages, places of birth, occupation, immigration and naturalization facts and more. 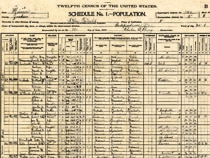 This database is an index to individuals in the United States enumerated in the 1890 special census of Civil War Union veterans and widows of veterans available on microfilm M123 (118 rolls) from the National Archives and Records Administration (NARA). Information listed in this index includes the veteran's name or widow's name, rank, year of enlistment, and year of discharge.

This database is an index to the head of households enumerated in the 1910 United States Federal Census, the Thirteenth Census of the United States. In addition, each indexed name is linked to actual images of the 1910 Federal Census. The information recorded in the census includes: name, relationship to head of family, age at last birthday, sex, color or race, whether single, married, widowed, or divorced, birthplace, birthplace of father and mother, and more.

The 1930 Census contains records for approximately 123 million Americans. The census gives us a glimpse into the lives of Americans in 1930, and contains information about a household’s family members and occupants including: birthplaces, occupations, immigration, citizenship, and military service. The names of those listed in the census are linked to actual images of the 1930 Census.