This database details those persons enumerated in the 1870 United States Federal Census, the Ninth Census of the United States. In addition, the names of those listed on the population schedule are linked to the actual images of the 1870 Federal Census, copied from the National Archives and Records Administration microfilm, M593, 1761 rolls; part of Minnesota T132. (If you do not initially find the name on the page that you are linked to, try a few pages forward or backward, as sometimes different pages had the same page number.)

Enumerators of the 1870 census were instructed to record the names of every person in the household. Added to this, enumerators were presented with printed instructions, which account for the greater degree of accuracy compared with earlier censuses. Enumerators were asked to include the following categories in the census: name; age at last birthday (if a child was under one year of age, months of age were to be stated as fractions, such as 1/12); sex; color; profession; occupation or trade of every male and female; value of real estate; place of birth; whether mother and father were of foreign birth; whether born or married within the year and the month; those who could not read; those who could not write; whether deaf, dumb, blind, or insane or "idiotic". No relationships were shown between members of a household. The categories allowed Congress to determine persons residing in the United States for collection of taxes and the appropriation of seats in the House of Representatives.

All states are now indexed and linked to the actual census images.

This database is certain to prove useful for those seeking early American ancestors.

The United States was the first country to call for a regularly held census. The Constitution required that a census of all "Persons...excluding Indians not taxed" be performed to determine the collection of taxes and the appropriation of seats in the House of Representatives. The first nine censuses from 1790-1870 were organized under the United States Federal Court system. Each district was assigned a U.S. marshal who hired other marshals to administer the census. Governors were responsible for enumeration in territories.

Updates:
6 Apr 2021: Corrections were made to the collection. No new records were added.

Provided in association with National Archives and Records Administration
This is a census of the U.S. population as of 01 June 1870. Learn where your ancestors lived, who lived in the household, ages, places of birth, occupation, and more. 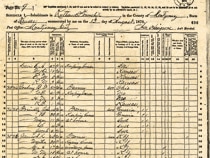 This database is an index to 50 million individuals enumerated in the 1880 United States Federal Census. Census takers recorded many details including each person's name, address, occupation, relationship to the head of household, race, sex, age at last birthday, marital status, place of birth, parents’ place of birth. Additionally, the names of those listed on the population schedule are linked to actual images of the 1880 Federal Census.

This database is an index to individuals enumerated in the 1860 United States Federal Census, the Eighth Census of the United States. Census takers recorded many details including each person's name, age as of the census day, sex, color; birthplace, occupation of males over age fifteen, and more. No relationships were shown between members of a household. Additionally, the names of those listed on the population schedule are linked to actual images of the 1860 Federal Census.