The 1930 Census contains records for approximately 123 million Americans. The census gives us a glimpse into the lives of Americans in 1930 and contains information about a household’s family members and occupants including: birthplaces, occupations, immigration, citizenship, and military service.

The census can be a valuable tool to use when researching your twentieth-century ancestors because it contains records for approximately 123 million Americans. If you had family in the United States during the early twentieth century, you are likely to find at least one relative’s information within these census records. This makes the 1930 census a good place to start research if you are a beginner, or if your family, vital, or religious records are missing.


History
The 1930 census began on 2 April 1930 for the general population of the United States. (The enumeration in Alaska began on 1 October 1929.) Regardless of when an individual was contacted, all responses were to reflect the status of the individual as of 1 April 1930.

Enumerators (census takers) collected the following information for each household:

Note: Individuals in Alaska, and Indians were asked slightly different questions. For example, Indians were not asked about their mother’s country of origin, but which tribe she belonged to.


The 1930 U.S. Federal Census Records Today
In order to protect the privacy of individual citizens, census records are not released publicly until exactly 72 years from the official census date.

Using the microfilm from the 1930 census, Ancestry.com created images of all the available census records. In addition, Ancestry.com indexed all the names in the census so they are searchable online.

Abbreviations were to be used in the columns as shown:

Which columns were enumerators required to complete in the 1930 census schedules?
Entries were required in the following columns:

Where are the original census records, and can I access them?
The original paper schedules have been destroyed; the 1930 census schedules were photographed and their images were placed on microfilm that is maintained by the National Archives and Records Administration (NARA).

How many people were included in the 1930 census?
The general census recorded a population of approximately 123,202,624 individuals.

To learn more about enumeration districts, the following reference materials might be useful. (These are available at the National Archives in Washington, D.C. and at NARA's regional records services facilities.)

Note: To complement its collection of 1930 resources, The National Archives has also purchased copies of city directories for 1928-1932. For a complete list of which directories it has, see NARA's website. These are not National Archives publications, but can be purchased from Primary Source Microfilm (an imprint of the Gale Group). For ordering information call 1-800-444-0799.

Some information for this article was provided by the U.S. Census Bureau.

Provided in association with National Archives and Records Administration 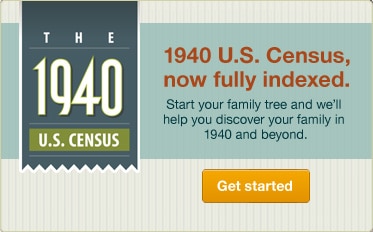 A clearer view of their census answers!
Watch our video to see how we're enhancing the 1930 census on Ancestry.com – and soon 1940, too. 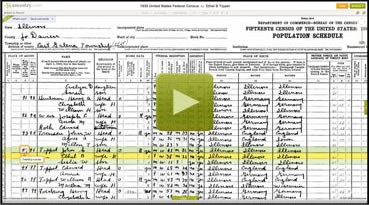 Records from The National Archives

The 1940 United States Federal Census is the largest census released to date and the most recent census available for public access. The census gives us a glimpse into the lives of Americans in 1940, with details about a household’s occupants that include birthplaces, occupations, education, citizenship, and income.