This database contains an index and images of marriage records from Missouri covering the years 1805-2002. Information that may be found in this database includes the following:

Note: Social Security numbers have been redacted from the images in order to protect privacy.

Marriage records are great sources for genealogists because they document an individual in a particular place and time as well as provide details about that person's marriage.

More about Marriage Records in Missouri:

Marriage records are held by the county recorder of deeds. Prior to 26 June 1881, no marriage license was required; the marriage was recorded in any convenient courthouse.

Marriage licenses are the most common marriage records in the United States. They are issued by the appropriate authority prior to the marriage ceremony, and they have come to replace the posting of banns and intentions. Marriage licenses, which grant permission for a marriage to be performed, are returned to civil authorities after the ceremony.

Marriage licenses exist in varying forms. A standard form generally asks for the names of the bride and groom, their residence at the time of application, the date the marriage was performed, the date the license was issued, the place of the marriage, and the name of the person performing the marriage ceremony.

Applications for marriage licenses have been required in some jurisdictions in addition to or in place of bonds. Applications are often filled out by both the bride and groom and typically contain a large amount of genealogical information.

This collection of Missouri marriage records covers the period between 1805 and 2002. It is searchable and there are images of both the index and actual marriage records. 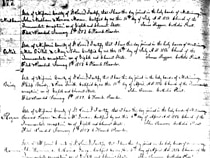 See a sample marriage record from this collection.

This database contains death registers from Missouri covering the years 1850 to 1931. Information contained in this database includes the following: name of deceased, gender, race, birth date or age at time of death, death date and place, parent's names and spouse's name.