The Bridge Between Eurasia and Africa

Discover more about your ethnicity with AncestryDNA. By comparing your genetic signature to the DNA of people from the Near East region, AncestryDNA can give you a clearer picture of your ethnic origins.

Geography and human history have kept this region perpetually in the spotlight. It sits between Eurasia and Africa and is home to some of the world’s earliest civilizations. It is also the birthplace of three of the world’s major religions—Judaism, Christianity and Islam—with the most holy places of those faiths scattered from Jerusalem to Mecca. Since it was first inhabited, this vital region has been a natural center of learning, trade, culture—and conflict.

The Middle East region includes the eastern Mediterranean coast (also known as the Levant), the Arabian Peninsula and Iraq. Because of its unique geography and long history of habitation, the area has seen plenty of different rulers. These include the Sumerians and Akkadians, among the earliest civilizations in the world, and the mighty Persian Empire, which fought the ancient Greeks at Thermopylae and Marathon. Foreign conquerors, such as Alexander the Great and the seemingly ubiquitous Romans, also dominated the area in their day. The modern cultural landscape began to take shape with the rise of Islam and the great Muslim conquests of the 7th century A.D.

As Islam spread outward from the Arabian Peninsula, so did the Arabic language, by far the most widely spoken language in the region. But “Arab” as an identity is a broad term that encompasses many diverse ethnic groups: the historically nomadic Bedouin of the Arabian Desert and the Palestinians, Syrians and Druze of the Levant are only a few. Although the vast majority of Arabs are Muslim, there is a significant Arab Christian minority, as well.

Today, 42% of all Jews live in the State of Israel. According to the Hebrew Bible, the Jews, or Israelites, are descended from Abraham. A Sumerian, Abraham traveled west to the land of Canaan (Palestine), which lay along the eastern coast of the Mediterranean. For much of their history, the Israelites were ruled by other empires, including the Babylonians, Persians, Assyrians, Romans and Ottoman Turks. But there were two periods of self-rule as well, including the reigns of David and his son Solomon.

During World War I, the Arabs helped the British defeat the Ottoman Empire, and the region was divided into French and British Mandates, which more or less defined the current national boundaries. After World War II, the British withdrew from the Palestinian Mandate, leaving the United Nations to divide the region into two states: one Arab and one for the Jewish Diaspora. The division ignited decades of fighting that still influence global politics to this day. The discovery of oil in the mid-1900s transformed the nations of the Arabian Peninsula and the Persian Gulf, catapulting them from among the poorest in the world to some of the richest. 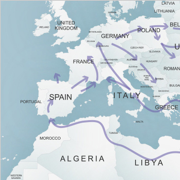 Migrations into this region

About 60,000 years ago, modern humans began a dramatic population expansion out of Africa. The first stop on this journey was the Middle East. For thousands of years, the Arabian Peninsula and the Levant were likely continually occupied, resulting in a broad pool of genetic diversity in this region. Additionally, The Middle East was a waypoint for people moving to and from North Africa, Central Asia and Europe.

Migrations from this region

The southern Arabian Peninsula is thought to be the source of a dramatic migration, some 50,000 years ago, along the coasts of the Indian Ocean. Following this southern coastal route, these early people likely exploited marine resources and migrated from Arabia into India and southeastern Asia, eventually reaching Australia. The Middle East has also significantly influenced European populations, being the basis of the occupation of Europe by modern humans 45,000 years ago. After the invention of agriculture, Neolithic farmers spread into and throughout Europe, contributing to a rise of genetic similarity between the two regions.

The dispersal of Jewish populations from the Middle East is thought to have begun 2,500 years ago. Although some Jewish populations remained in this region, others eventually dispersed to North Africa, Europe, Central Asia and even India.