The Dominion of Canada formed as the result of desires for a national railroad system and a common defense. Quebec was one of the country’s four original provinces. 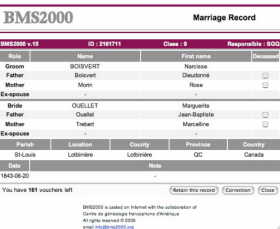 In 1867, Marie Rose Morin was living in Lotbinière, Quebec as they celebrated the formation of the autonomous Dominion of Canada. *

* Insight to be reviewed

{{count}} of your family members likely lived in the region as the United Province of Canada joined the Dominion of Canada and Quebec became its own province.

Canada Day marks the anniversary of the confederation that unified Nova Scotia and New Brunswick with the United Province of Canada, which subdivided into the provinces of Quebec and Ontario. The Quebec area had been home to skirmishes between the French, the British, the aborigines, and people of French origin made up 75 percent of the 1.2-million residents in 1867.Residents were relieved that Quebec became its own province, allowing them to retain the French language and a sense of their own cultural identity. Sir John A. Macdonald was elected the first Canadian prime minister. At midnight on July 1, 1867, 3.3-million Canadians celebrated with church bells ringing throughout the land. The day held parades and in major cities Queen Victoria’s proclamation uniting the new Dominion of Canada was read aloud. Bonfires and fireworks lasted well into the night as the fledgling country celebrated its birth.